The Kingdom of Grand Bonny is located fourty Kilometers Southwest of Port Harcourt, the capital of Rivers State of Nigeria. It lies within latitude 40° 278°, longitude of 7° 1000° and borders the shores of Southern Atlantic Ocean into which its main River, the Bonny Estuary, finally flows.

It shares boundaries with the Billes and Kalabaris in the West, the Andonis in the East, the Okirikans and the Ogonis in the North and the Atlantic Ocean form the boundary in the South.

The traditions say that they left Kolokuma because of civil conflict. Although the exact time of the conflict is unknown, we can place the movement out of Kolokuma between 12th and 15th century CE (AD).

The leaders of the migration were Opuamakuba, his brother Kala-Beni (Alagbariye or Alagba-ari-gha) and Asikunuma alias Okpara Asimini. Leading the families northwards, they first settled in the now Ndoki territory where they encamped for some time (prince Edimini the Great Grandson of Opuamakuba was born here). They moved from the Ndoki area, but left behind some of their people, these inter-married with the southern Ibo and gave birth to the Ndoki people founding among others villages such as Okolomakiri, Ayama, Osobie and Oruama or Azuogu. The ancestors then settled in the now Ogoni area and encamped at a site where Opuoko town now stands (thus the name Opu-Oko. from that place a village called Kala Oko was founded).

Kala-Beni being a hunter went hunting one day and came across the site of Bonny Town where he saw many birds. He returned to report to Opuamakuba that there was good land to settle on further south. Opuamakuba then made the decision to leave the main land, first to Orubiri (Orupiri) where Opuamakuba died. Kala-Beni then lead the group to the site of Bonny Town which they named Okoloama, while back in the central delta their relatives called it Okoloba (after the Okoloba which they came from). Kala-Beni became the founder, and the whole group was subsequently called the people of Ibeni (Beni) which was corrupted to Ibani. Kala-Beni also established a shrine dedicated to Opuamakuba which he called Kala-Ikuba. The first crowned ruler was King Asimini followed by a succession of rulers called Amayanabo (Amananabo in the western delta).

The City State, which was to become known as Grand Bonny, was made up of the following towns and villages:

In 1867-70 a civil war at Bonny resulted in the foundation of Opobo. Led by one Jaja of the house of Opubo they migrated and Jaja became their King.

The people are highly receptive and friendly. They are mainly fishermen, who are involved in shallow and deep/ sea fishing. They were also involved in trading and salt making. The receptiveness and peaceful nature of the Ibani people is reflected in their willingness to accommodate the smooth operation of the oil and gas Companies.

Grand Bonny Kingdom predated the Nigerian nation and has been in the World Map of fame even in the pre-colonial days. This is because the Grand Bonny Kingdom occupies a preeminent position in Nigeria’s economic and developmental history as it was in the olden days during the infamous Trans/Atlantic slave trade and later the palm oil trade which spanned through a period of nearly 3 centuries. This robust position was a result of its natural harbor and geographical advantage as the most important and safe trading sea port in the Niger Delta region, which contributes not less than 90% of Nigeria’s GDP.

Hope Wadell visited Bonny in 1846 and wrote as follows…”By its safe and extensive anchorage, its proximity to the sea and connection with the Central Water of Africa, Bonny is now the seat of the palm/oil trade as it was during the slave trade”.

The natural harbor with deep waters made Grand Bonny prominent globally. It all started with the infamous Trans/Atlantic slave trade of the 1600s, and later in the 1800s moved to agricultural produce (palm oil and kernels) and primary commodities, to crude oil and most recently gas, which is competing to overtake oil as the economic mainstay of the Country.

For centuries, the compelling bond of commerce between the West and Grand Bonny has been captured in religion, relics, antiquities, monuments and artifacts. Naturally there were sociocultural impacts that eroded the cultural fabric of the Ibani society. These include the corruption and Anglicization of indigenous Ibani names, words, values, way of dressing, native plays, dances and most importantly the Ibani dialect, which is today under the threat of extinction. 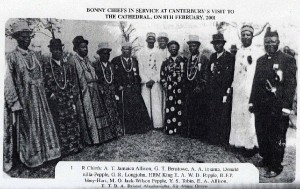 The Ibani people are Christians. Majority of the inhabitants of the area converted to Christianity in the early 1800’s. The Christian faith in Bonny was introduced by King William Dappa Pepple, who while in England elected to become a Christian King so that God will grant him power and wisdom to rule his people. King William Dappa Pepple was Baptised by Reverend G. H. McGill and later confirmed by Dr. Tait, the Bishop of London. At the behest of king William Dappa Pepple the Church Missionary Society in London sent Bishop Samuel Ajayi Crowther, the first Black African Bishop, to Bonny in 1864 to establish the Gospel of our lord Jesus Christ in Bonny.

From Bonny Christianity spread to the neighboring communities of Tuwon and Nembe in 1868, Kalabari in 1878, Okrika in 1878, Andoni ,Ogoni, Ikwerre and the hinterlands of Eastern Nigeria. On January 24, 1889, Bonny Christians presented their beautiful church to Bishop Samuel Ajayi Crowther as his Cathedral. This he accepted and St. Stephen’s church in Bonny became the first Cathedral in Nigeria and the second Cathedral in West Africa. The Church was eventually dedicated by the Bishop on 27th February , 1889. Bishop Crowther’s throne which he hallowed on February 27, 1889, remains till this day at the Lady chapel in Stephen’s Cathedral Bonny.

On April 27, 1952 Bishop Dimieari from Bonny was enthroned as the inaugural Diocesan Bishop of the Niger Delta Diocese at the St. Stephen’s Cathedral in Bonny. Bonny continued to blaze the trail with Rev. Cannon T. T. Green who was ordained a Deacon on December 20th 1953 at the St. Stephen’s cathedral Bonny. He graduated with a Bachelors Degree in 1958 from St. John’s College, Dunelm, England , to become the first graduate pastor in the Niger Delta Diocese and in fact east of the River Niger in Nigeria.

Before the advent of Christianity the early settlers in Bonny as Most Eastern Niger Delta communities were worshipers of indigenous religions. They had Tutelary deities (Ama Oru) for various purposes, which they worshipped; whose welfare was particularly associated with that of the communities. The people could expect help and protection from their deities provided they conformed to the rules and regulations. The people also expected their deities vengeance should they offend the deities or fail to keep the rules.

The Ibani people of Grand Bonny Kingdom had several tutelary deities, but their most famous deities were Ibani-Nyana-Simingi which they inherited from the indigenous Inyon-Ogkpon Community (now part of Tombia). They were earlier driven away by Ibani people during the reign of King Dappa-ye-Amokiri of Bonny, to the New Calabar River area. Ikuba, a war deity situated at Orupiri and Bonny Town was seized from the Anayangala people of Andoni during an encounter. Tolofari, is situates at Kalaibiama had a sacred stone as the totem. Tolofari and Nungbaw were strong Bonny deities on the land worshiped by the people. Ogbolodo, Akanja Ekerema, Ananaba, Fibiribi, Otuburu, Okoba, Adam, Aburuko and Finimaso were other deities worshiped by various Bonny Communities at that time.

Tutelary Juju shrines and communities, with time and custom, became sanctuaries to which any person(s) who felt endangered could run to and where they could remain unmolested until their trouble had been settled.
From 1861 when King William Dappa Pepple brought Christianity to Bonny Kingdom, Bonny King (George Pepple I), Chiefs and people denounced the worship of deities on the 21st of April, 1867 (Great Easter). The Temple of Skull was destroyed in 1888, and the worship of deities ceased to be a national issue. 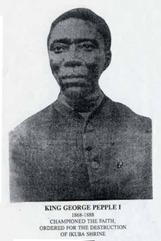 The Ibani have had kings for a long time. Kings, Amanyanabo (owner of the land) or Amadabo (also applied to a regent or subordinate town or district head), were “crowned by the high priest, Orutingi or Ndende, assisted by minor priests, agbara-na-sonibiena, and the nobles, aseme”.

The crown, called anya-nchu, was made out of akpe (raphia) in the shape of a pyramid, owu asara head. They wore royal robes, mbassa and ngu-ikaki; and used a carved wooden throne called imine. Ndoli ruled over the Ibani at Orupiri where he is believed to have died. Little is recorded about him, and the extant royal genealogies show no relationship to any other kings.

The main industry of the Ibani people (people of Bonny) is Fishing. This remained true till the 20th century. In the 18th and 19th century, Bonny was the center of a powerful trading state, and in the 19th century it became the leading site for slave exportation in W Africa. From 1885 to 1894 it was the administrative center of the British Oil Rivers Protectorate. Bonny declined in the 20th century ,but revived after 1961, when its port was modernized as the export point for petroleum refined at Port Harcourt.

places to visit in bonny island